Take a look at how many of us came out in 90+ degree heat to protest federal actions against children and parents at the border and beyond. Reception from passing cars was supportive with many honks and waves.  Below is a quote from CU Indivisible on Twitter. 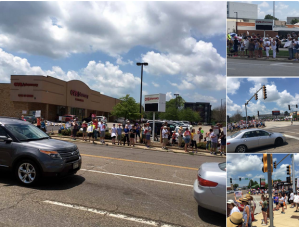 “Huge turnout here at the #FamiliesBelongTogether rally here in CU. Hundreds of passionate voters and soon-to-be voters making it loud and clear that here in #IL13 we won’t settle for feckless “representatives” like @RodneyDavis who refuse to stand up to @realDonaldTrump pic.   twitter.com/6vDYKv6snX“

Questions, suggestions or calendar submission?  Email us at: cup61820@gmail.com.

This is an active site covering a wide range of local and national events and information.